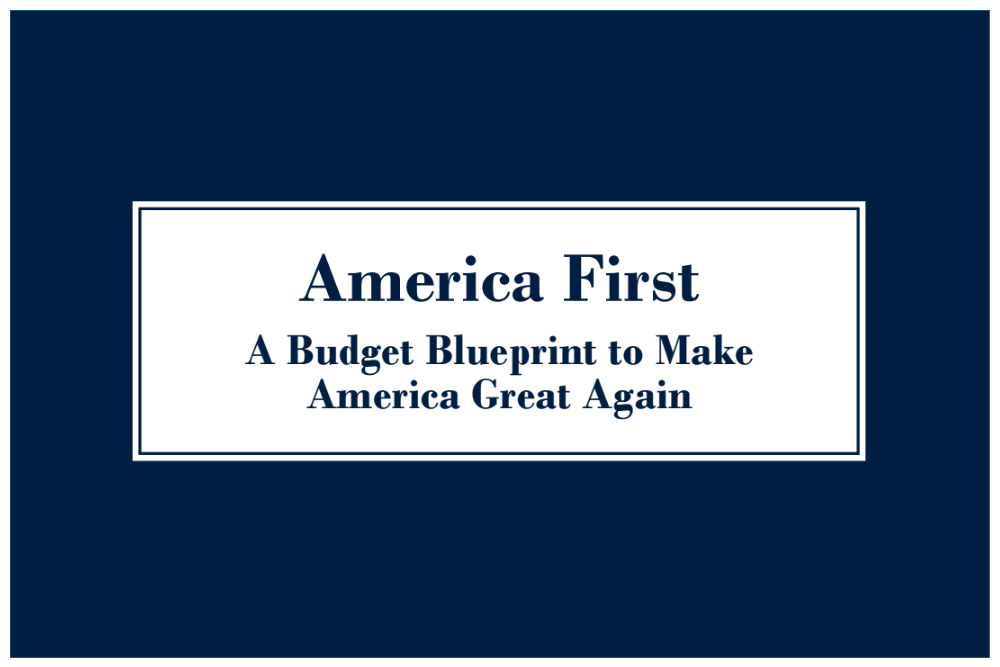 On March 16th, President Trump unveiled a budgetary outline for the upcoming fiscal year, titled “America First, a Budget Blueprint to Make America Great Again.” This budget proposal includes large cuts to most scientific agencies ranging from a 30 percent cut for the Environmental Protection Agency, to a 21 percent reduction for the National Institutes for Health. While the budget will not likely resemble this proposal, it does outline the Administration’s priorities, and underscores the importance of our movement.

On March 16th, President Trump and the Office of Management and Budget released a budgetary outline for the 2018 fiscal year. Titled “America First, A Budget Blueprint to Make America Great Again” (see the full document here), the budget proposal outlines the discretionary spending plan for the first full fiscal year of the Trump Administration. Discretionary spending accounts for approximately 25% of all federal spending, with the current discretionary budget set at 1.2 trillion dollars. Under this new proposal, defense spending will be increased by 54 billion dollars, or 10%, which would be obtained through cuts in various programs throughout the federal government. Details within the budgetary outline are often vague, while other numbers are given without context to previous years’ spending. It is expected that the details of how these budgetary changes are to be implemented will be either determined by the agencies themselves, or by Congress.

How scientific agencies and missions fare under this proposal

The federal government contains many departments and agencies that provide funding and grants that support scientific research and education. Under this budget proposal, most of these agencies would see cuts, such as a $2.1 billion, 31 percent cut for the Environmental Protection Agency (EPA), a $5.8 billion, 22 percent cut for the National Institutes for Health, and significant cuts to the Department of Energy and the National Oceanic and Atmospheric Administration as well. These different agencies conduct scientific research directly (around 10 percent of their spending), as well as providing money to researchers in the form of grants (80-85 percent). Most of this money is already committed to existing grants that run between two to four years in length, leaving only a small amount of money available for new research or renewals of existing funding. The size of the proposed cuts makes it likely that few, if any new research awards will be made this year.

For many research groups, especially newer, less-established ones, a year without the single largest source of research funds will cause many of them to idle, or even shut down. For the Milwaukee area, this proposal comes at a time when scientists in the area are working to make healthcare better, our environment cleaner, and our water safer.

Impacts on the Greater Milwaukee Region

The Greater Milwaukee area is home to a sizable number of institutions dedicated to scientific discovery, pulling in a significant share of over $700 million in research grants the state receives every year, including over $90 million to the Medical College of Wisconsin from the National Institutes for Health alone. Some of the groups these grants fund, such as UW-Milwaukee, the Medical College of Wisconsin, and the Blood Research Institute are aimed at keeping us from getting sick, and when we do get sick, it’s aimed at making us well sooner. Other groups, such as UW-Milwaukee’s School of Freshwater Sciences work to make the lakes we swim and boat in safe, and make sure we can eat the fish we catch worry-free. Yet, others still, such as the Milwaukee School of Engineering breeds new innovations in materials and engineering that keep our bridges safe, and help keep us from sliding into the ditch in the winter. Additionally, under the Small Business Act, all federal agencies that hand out $100 million or more in grants must set aside part of their money (currently 3.2%) to fund Small Business Innovation Research grants, money designed to help innovators get the money they need to get off the ground. 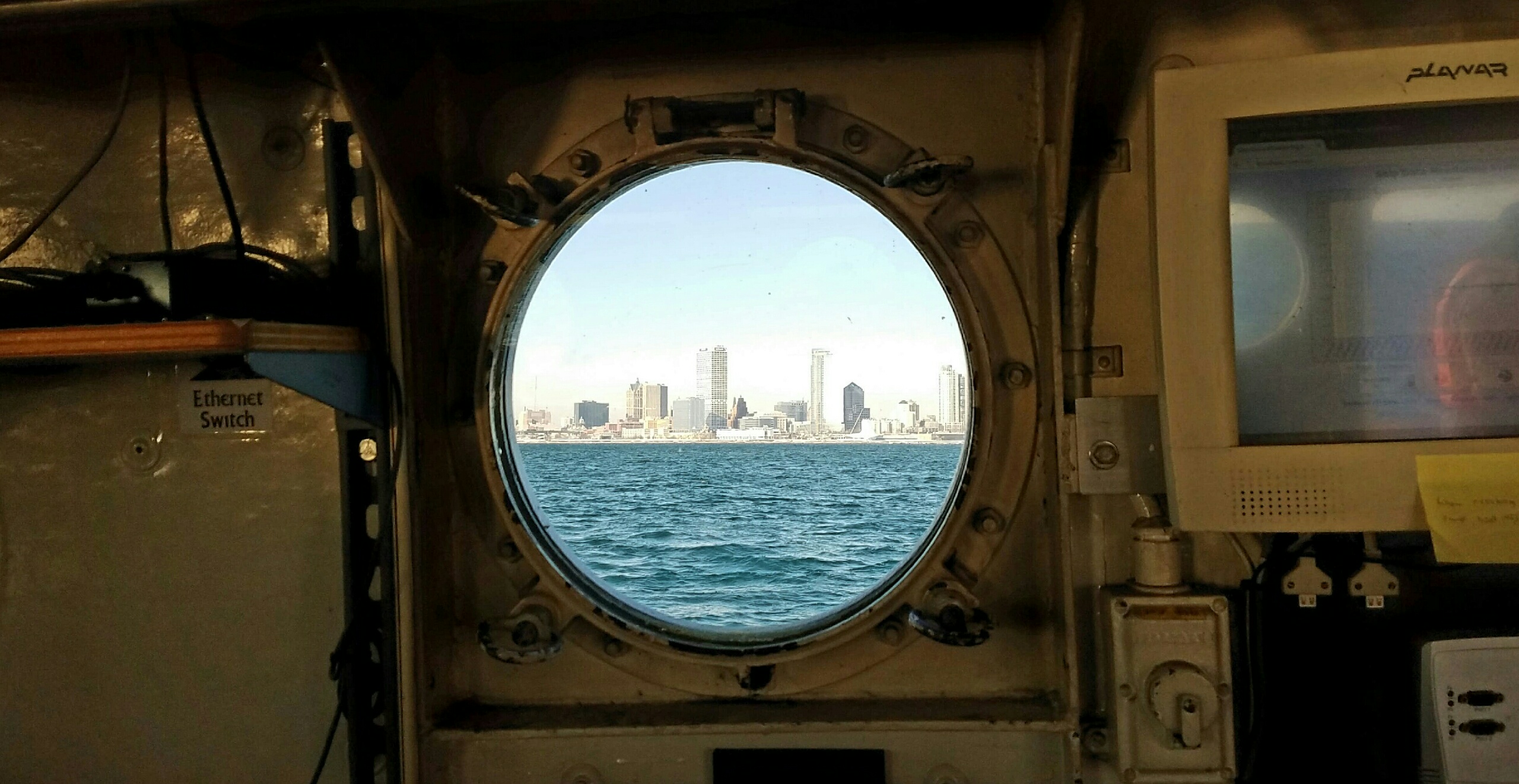 Milwaukee skyline from Lake Michigan, as seen through a porthole on the UWM Research Vessel, the R/V Neeskay.

Other than funding new research, the federal government also provides funding and resources to enact evidence-based policies aimed at improving our environment. One such project is the Great Lakes Restoration Initiative (GLRI), a $300 million dollar project that provides funds for the cleanup of toxic materials and environmental conservation in the Great Lakes. It funds projects here in the Milwaukee region focused on cleanup of polluted rivers, such as the Milwaukee, Menomonee, and Kinnickinnic rivers, with the goals of making them better for the ecosystem and the people who want to boat and fish on these rivers. The GLRI also funds projects aimed at reducing agricultural runoff, with the goal of preventing harmful algae blooms in places such as Green Bay, helping to keep water at the Packer games safe to drink, and fish from Green Bay safe to eat.

In general, most agencies that support scientific endeavors enjoy strong bipartisan support, with increases to funding passing easily in the past. The danger with this proposal is not just that it will pass in its current form, but that it serves as a starting point for negotiations for our representatives, that large cuts to the sciences are on the table, even if they are not the dire cuts within this proposal.

We do, however, have the opportunity to influence our representatives, to show them the positive impact that publicly funded science has to our region as a whole, that taking a pro-science stance is a pro-Wisconsin stance.