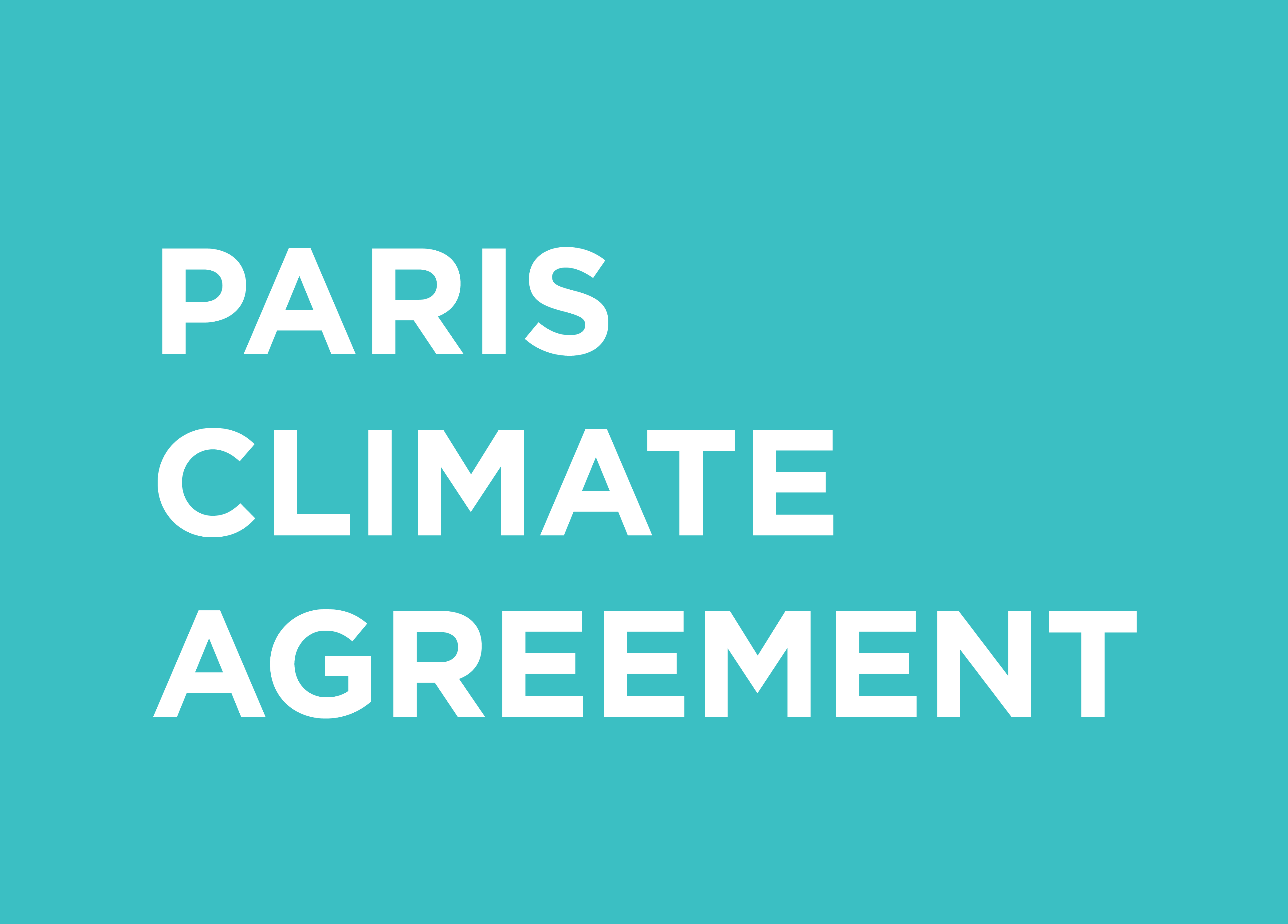 On June 1st, 2017, President Trump declared that the United States would no longer participate in the Paris Climate Agreement. Below are statements from local politicians and groups on the Agreement and the consequences of withdrawal. 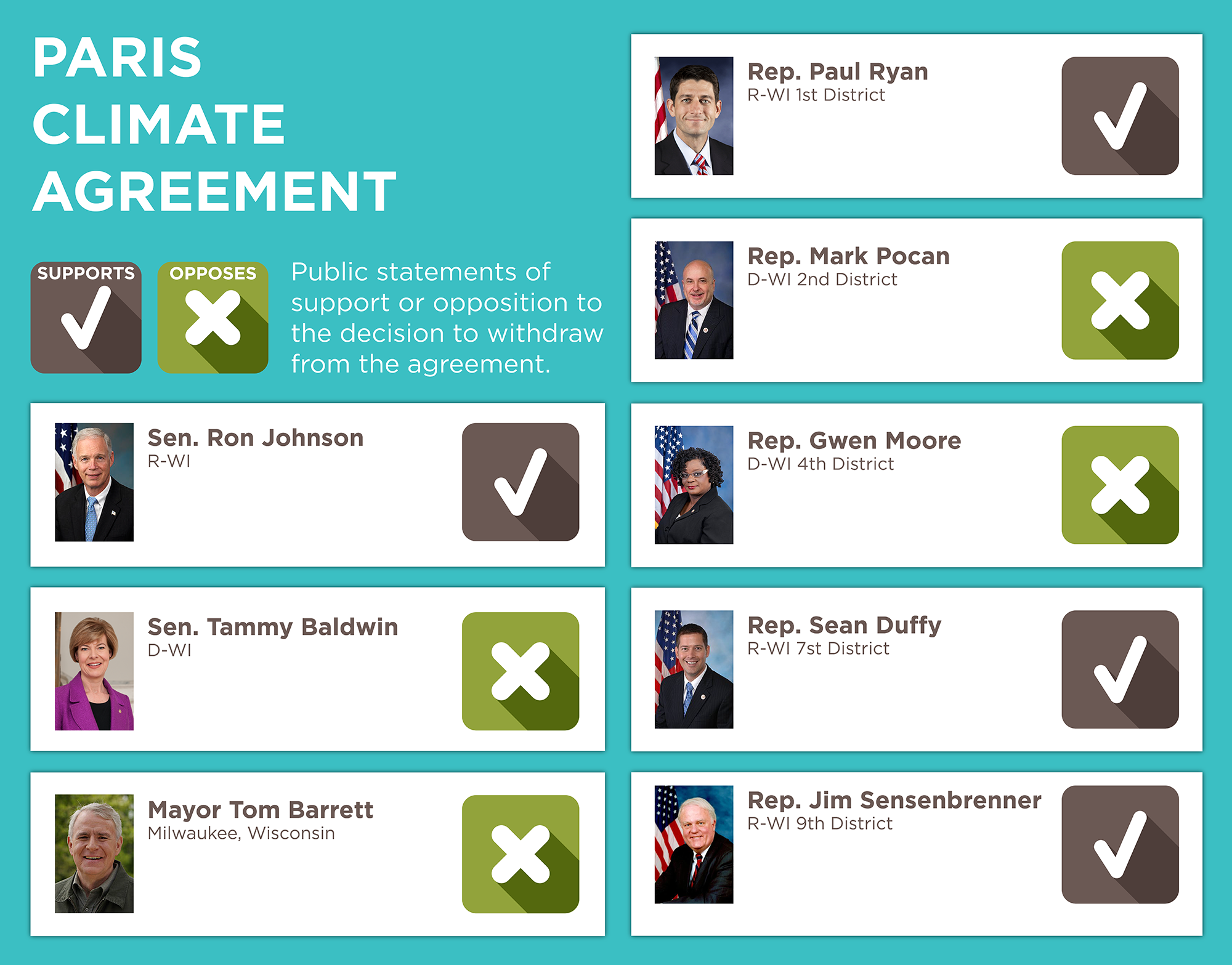 “President Trump’s decision to withdraw the United States from the Paris climate accord – a landmark multinational agreement between 195 nations –  is the latest salvo from an administration known for its anti-science and anti-environment agenda. This misguided action signifies a direct threat to our national security, our public health, and our country’s economic growth.

“This historic pact not only strengthens the green economy, but it also encourages innovation from companies large and small. Although he claims to be pro-business, President Trump’s blatant disregard for this significant accord ignores the leadership shown by a diverse contingent of Fortune 500 companies like Apple, General Mills, and General Electric – all of whom support our continued membership in the agreement.

“Today’s ill-advised action by the president demonstrates his insistence on putting the wishes of his fringe supporters above all else. The Paris accord represents a strong commitment to securing our planet for future generations. I call on all Americans to speak out against such a dangerous move and encourage the president to reconsider this careless decision.”

“The Paris climate agreement was simply a raw deal for America. Signed by President Obama without Senate ratification, it would have driven up the cost of energy, hitting middle-class and low-income Americans the hardest. In order to unleash the power of the American economy, our government must encourage production of American energy. I commend President Trump for fulfilling his commitment to the American people and withdrawing from this bad deal.”

“The benefit of the Paris agreement was suspect from the start. The Copenhagen Consensus used the UN’s own model to estimate the deal would reduce warming by at most 0.3 degrees by 2100. Instead of spending hundreds of billions, if not trillions, of dollars to barely move the needle on global temperatures in a hypothetical distant future, the world’s limited resources would be better spent providing safe drinking water, preventing malaria, and taking other measures to alleviate human suffering in the here and now.”

“President Obama bypassed the Constitution and entered the United States into a losing agreement when he committed the country to the Paris Climate Accord. Knowing he could not get Senate approval for a treaty, Obama sidelined Congress and called the deal an “executive agreement.”

“The agreement, which does not hold all nations to the same standards, forces the U.S. to reduce emissions immediately while allowing global polluters, such as China and India, to expand their carbon footprints through the 2020s. This is not only bad for the environment, but it puts the U.S. at a severe economic disadvantage.

“Further, it hurts Wisconsin. Coal provides more than half of our state’s net electricity generation, and our manufacturers already pay more for electricity than most of our neighboring states. This means higher electricity costs to Wisconsin’s consumers, a less competitive state, and stunted economic growth. “I applaud President Trump for putting America first and leaving this unfair climate agreement. We all want cleaner air and water, but we can achieve these goals without handicapping the country and outsourcing jobs to foreign countries.”

“If Trump withdraws from the Paris Climate agreement it would be unprecedented. The historic agreement was adopted by almost the entire world – 195 countries. Ignoring climate change is foolish and short-sighted. Inaction will limit our country’s long-term prosperity and expose our children and grandchildren to catastrophic consequences because President Trump wants to make good on his promises to Big Oil – not the American people.”

“Donald Tump’s decision to withdraw from the Paris Climate Agreement is reckless and irresponsible. In Milwaukee, we have led the way because we know that you can be pro-environment and pro-business. Being good for the environment is good business! Mayors across the country are ready to stand up and lead the way to fight climate change and we will continue to do just that in Milwaukee.”

“Let there be no doubt, global climate change poses a growing threat to our planet, our country, our Great Lakes and Wisconsin. Unfortunately, President Trump refuses to believe climate change is occurring, questioning sound science and calling it a “hoax.” Backing out of the Paris Agreement now and turning our back on the rest of the world after years of strong U.S. leadership, is bad for our environment, bad for our economy and fails future generations. While the threat of climate change may be daunting, we cannot continue to let the challenges overwhelm us into inaction. When a vast majority of climate scientists agree that human activity is drastically changing the planet’s climate, doing nothing is simply not an option. The longer we wait, the more costly climate change will be. We must take action now. We have a moral obligation to future generations to do something about this challenge. It’s now or never.”

“Today, President Trump broke our promise to the world that we would stand with the international community in supporting the Paris Agreement. Trump is sending a dark signal to the world; his bizarre behavior shows that he is more concerned with doling out favors for polluters rather than protecting the health and prosperity of our nation and planet. This is the time when we should be working together with the international community to take decisive, bold action to combat the negative effects of climate change before it is too late. Instead, his betrayal of science and harsh rejection of worldwide efforts to safeguard our health and environment dangerously jeopardizes American interests and further isolate us. Although Trump and his polluter allies are climate change deniers, the overwhelming majority of our neighbors understand the simple truth that climate change is real and is happening, that humans are contributing to it, and that no matter how fervently they delude themselves we are already witnessing its effects. It is time to take a stand and let Trump and the world know that Americans understand the growing crisis of climate change and that we strongly oppose President Trump’s immoral betrayal of our conservation commitment.”

“Since the very beginning of this administration, climate change has either been put on the back burner or completely removed from many of the federal government’s websites and it feels like it’s not getting the attention that it needs. The weather variability that is taking place and has taken place for some time is very concerning for many folks that are involved in agriculture.”

“Part of the Paris Climate Agreement would have required developed nations like the United States to pay $100 billion a year to developing nations for what some have called climate reparations,” he said. “U.S. taxpayers are relieved.”

Last year nearly 200 nations signed a landmark agreement to lower greenhouse gas emissions in an effort to save the planet from the worst impacts of climate change. The Paris climate agreement was the result of nearly two decades of collaboration between world leaders, with U.S. leadership, that finally established a strong international strategy for curbing global warming pollution.  The rise in global temperature is leading to rising sea levels, increased heatwaves, and more intense droughts. Climate change is impacting food supplies, economic development, and our national security. A 2014 defense review by the Pentagon found that the pressures caused by climate change will influence resource competition while placing additional burdens on economies, societies, and governance institutions around the world. Climate change threat multipliers will lead to more poverty, environmental degradation, political instability, and social tensions, which will enable terrorist activity and other forms of violence, the report stated.

Pulling out of the Paris climate agreement now would be a huge mistake. The diplomatic repercussions of withdrawing from the Paris Agreement would be enormous. Withdrawing from the agreement now would tell our allies that America doesn’t follow-through on its global promises and that our leadership in other critical areas, like security and trade, cannot be trusted. If the U.S. turns its back on the climate agreement, we’ll be turning over our global leadership on clean energy jobs to China and other nations that are committed to a clean energy future.